Among the few advances made at COP26 at the end of 2021 is the commitment, signed by more than 140 countries, to end tropical deforestation by 2030.

Deforestation is indeed a major cause of greenhouse gas emissions, and the conservation of forest carbon sinks seems to be essential in order to achieve carbon neutrality.

While the objectives are clear, the means to achieve these are less so. How to effectively protect tropical forests? Among the options for conserving these ecosystems, REDD+ projects (to reduce emissions linked to deforestation and the degradation of forests) notably take the form of payments for ecosystem services where the aim is to reward local actors for stopping deforestation.

These projects are regularly funded by carbon offset mechanisms: private companies that wish to offset part of their greenhouse gas emissions buy carbon credits from these projects on the so-called voluntary markets. Thus carbon offsetting has the essential advantage of mobilizing private funds to finance the ecological transition of the agricultural and forest sectors.

A certain number of criticisms are frequently made against carbon offsetting. Assimilated into greenwashing, it is believed that it allows polluting companies to clear their conscience and to communicate on offsetting, and to avoid the efforts needed to reduce their own emissions.

The real additionality of projects is also often questioned: the projects that are funded should demonstrate that, if they had not been put in place, the amounts of carbon emitted would have increased or less carbon would have been sequestered.

In the case of avoided deforestation projects, it must be demonstrated that the project has effectively contributed to reducing deforestation, compared to a reference scenario. However, studies on the impact of forest conservation programs highlight the substantial heterogeneity in the capacity of these projects to reduce deforestation. 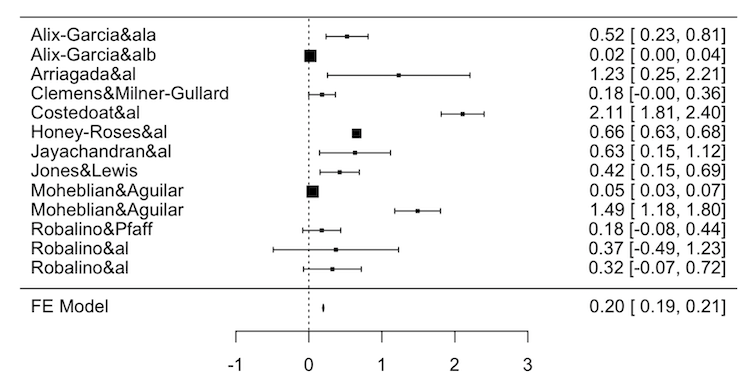 Projects with various promoters and objectives

In a recent publication, we tried to understand what the sources of these heterogeneities could be.

To do this we start from an observation: that promoters of the avoided deforestation projects are of a diverse. Some are NGOs, others are private companies. We can therefore think that project leaders of various kinds have different ways of proceeding and of implementation; which can lead to different results in terms of additionality.

Some avoided deforestation projects also exclusively target an environmental goal (reducing deforestation), while others seek to combine environmental and rural development objectives (for example, reducing poverty or improving the resilience of local populations).

The certification of projects is a good illustration of these different aims: a project focused on avoided deforestation will only certify reductions in greenhouse gas emissions (certification by the Verified Carbon Standard label, the most commonly used label), while a project with a joint environment-development objective will adopt dual carbon and co-benefit certification (combination of VCS and Climate Community and Biodiversity labels).

Focus on six projects in the Brazilian Amazon

Using a database of REDD+ projects, we assess the impact of six avoided deforestation projects in the Brazilian Amazon.

In order to determine if a project has actually made it possible to reduce deforestation we have to set up a control group, that is to say a group of observations similar to the situation of the group that is processed (the project) if this had not been processed. To do this, we use a matching method: for each observation treated by the project, an algorithm searches for several possible similar observations (three or five) not processed in a nearby geographical area.

Applying these methods, what do we find? First, the projects that present the joint objectives of forest conservation and rural development, particularly those promoted by NGOs, are generally located in areas where deforestation pressures are high. These are in particular areas that are more urbanized or areas that are close to road infrastructure.

Despite this, according to our analysis, they are struggling to offset these pressures, at least in the short term, and to avoid deforestation. This result tends to highlight a difficulty in combining environmental protection and development.

Conversely, the only projects for which we can find evidence of additionality are those carried out by private companies whose objective focuses solely on forest conservation but which are located in areas where the pressure to carry out deforestation seems to be weaker.

The credibility of carbon certification in question

We can draw two lessons from this study. First, while we can in no way say, on the basis of six projects, that certain types of promoters are systematically more efficient, private companies are not necessarily less effective than NGOs in reducing deforestation. Second, it can be difficult to combine forest conservation and rural development.

Overall, although our analysis only covers a limited number of projects, it strongly questions the credibility of carbon certification mechanisms. Out of six certified projects that are able to issue and trade carbon credits, only one seems to have resulted in effective reductions in emissions.

Without necessarily calling into question the appropriateness of carbon offsetting, our results therefore warn against a risk of “hot air”, i.e carbon credits that do not correspond to any emission reduction and which underline the need for a more rigorous impact assessment.

Gabriela Simonet, circular economy manager at Grand Annecy, contributed to the writing of this article.

This article is republished from The Conversation under a Creative Commons licence. Read the original article.