Invasive alien species are animals and plants that are introduced, become established and spread beyond their natural ecological range. They can have profound negative effects on biodiversity, ecosystem functioning and ecosystem services, i.e. the benefits that societies derive from ecosystems. Biological invasions can thus be responsible for significant social loss that can be measured in monetary terms. The InvaCost database[1] aims to identify and present in an homogeneous way all the evaluations of these costs. The objective of this paper was to highlight the importance and the strong growth of the economic costs associated with biological invasions and to draw attention to the InvaCost database in order to ensure its sustainability and its development as a collaborative tool between all the researchers who are involved in this field and who are expected to contribute to it.

One thousand three hundred and nine evaluations published from 1970-2017 in scientific journals or gray literature and were included in the meta-analysis. This number covers only a subset of the economic impacts caused by biological invasions; their total converted into US$ in 2017 amounts to 1288 billion. This number is not very significant, even if at a minimum it shows the importance of these costs, especially as there is a clear trend of a threefold increase in costs every decade. These estimates are certainly flawed by multiple biases that are analyzed in the article, however such a strong trend is undoubtedly robust to calculation errors.

The costs related to biological invasions are very heterogeneous, but a distinction can be made between the costs linked to the effort to manage invasions and those linked to damage, making it possible to highlight the significantly faster growth of the latter, which are now tenfold higher than the management expenses, as shown in Figure 1.

We show that the documented costs are widely distributed, but have strong gaps at regional and taxonomic scales. Overproportioned estimations in North America can be explained by the fact that the costs of invasions are higher in regions that are more economically developed (more production and infrastructures likely to be affected and more means that can be mobilized for management); it is likely that the costs are only known when they have been evaluated. 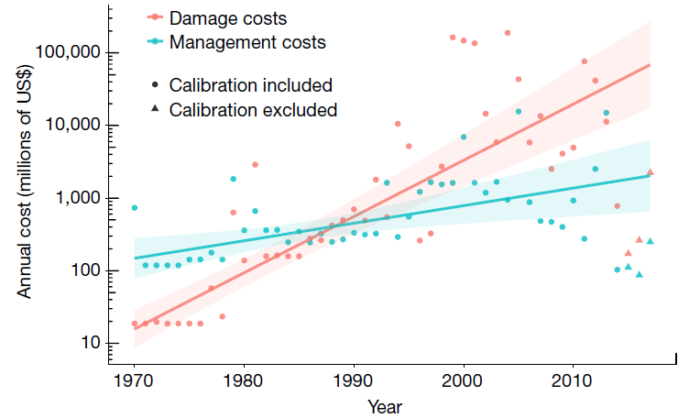 The Invacost database also made it possible to identify the taxa (species or other relevant element of the classification of living organisms) of the costliest invasive populations (see Figure 2). Insects, which had been the subject of a previous meta-analysis[2], especially disease-carrying mosquitoes are clearly in the lead, ahead of small rodents (rats and mice) and cats which have had a strong impact on many fauna, especially on islands when they follow human migration, but are not the subject of significant management efforts. Formosan termites and fire ants also cause significant damage. The absence of plant species among the most significant taxa was noted, but could result from a greater underestimation 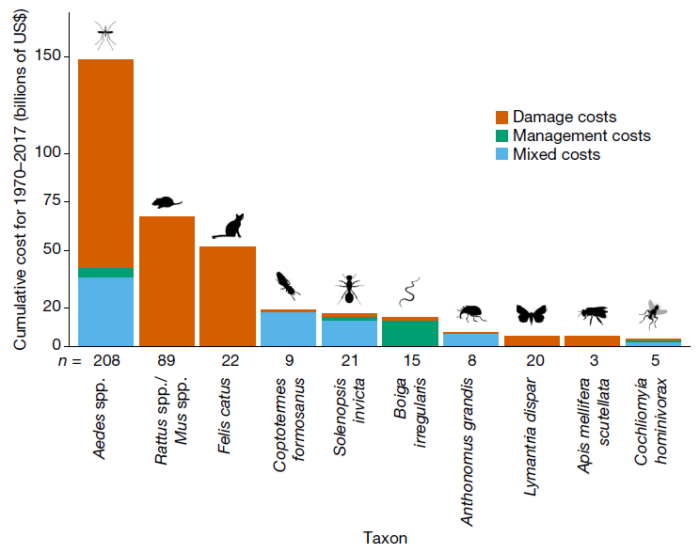 Research that documents the costs of biological invasions needs to be further improved and developed, while the very nature of these costs needs to be clarified and explained. Interdisciplinary collaborations, particularly between ecologists and economists, make it possible to integrate analyzes based on an in-depth understanding of the mechanisms at work in ecosystems and societies. Nevertheless, our findings already provide an unambiguous call for the implementation of more ambitious management measures and international agreements to reduce the burden of invasive alien species

[1] InvaCost was initiated by a group of ecologists specializing in biological invasions around Franck Courchamp (DR CNRS at the Ecology, Systematics & Evolution laboratory on the campus of the University of Paris-Saclay) who sought to collaborate with economists to clarify the conceptual and methodological frameworks underlying these assessments.